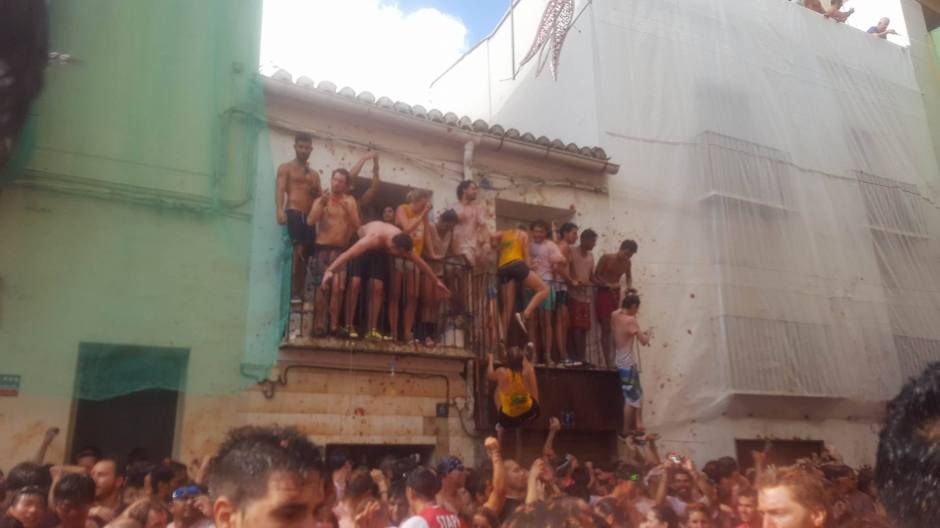 Have you ever thrown food at your friends? Maybe when your siblings annoyed you? Now imagine if you could do that with no negative consequences. No getting yelled at, no getting grounded and no being told not to play with your food.

La Tomatina, for those of you that don’t know, is basically the biggest food fight in the world.

150 000 kilograms or 150 000 tomatoes (reports vary, it might even be tonnes!) are thrown during the hours of the festival. The tomatoes are a non-edible variety brought in from around Spain and are grown especially for the festival. This does not mean that they are spoilt or rotten. You bruise like crazy when they hit you! 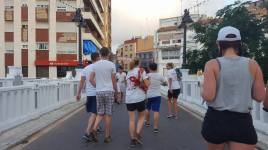 On their way into La Tomatina 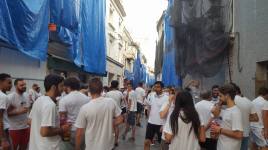 People mingle around waiting for festivities to start

The case I used for my phone

People begin to filter into the town of Buñol in the early hours of the morning before the festival officially begins. This is to ensure that you can grab a great spot to see the signature event (other than the tomatoes) – the greasy pole. 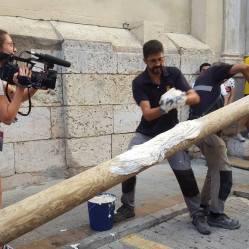 Grease is applied to the pole 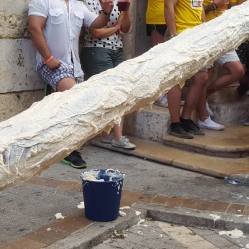 Great is applied to the pole the entire way up 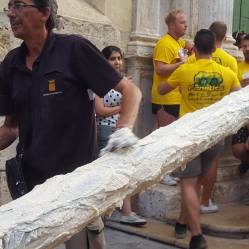 Grease is applied to the pole the entire way up

The pole is coated in grease (I think it might have been a type of soap rather than lard) and a ham is hung on the top. Festival goers then attempt to climb the pole in order to reach the ham, and the festival is not supposed to start until the ham has been reached. Locals spray hoses to make the pole even harder to climb! With the mixture of water and grease, it’s very difficult to get the ham and apparently the last time it was successfully attained was two or three years ago. 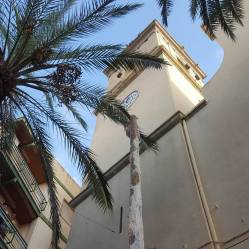 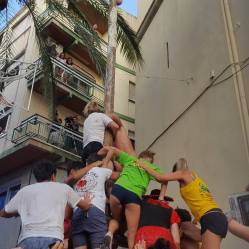 Festival-goers strive to reach the ham 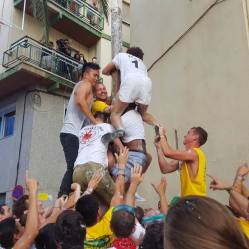 Trying to climb the greasy pole

Festival goers try over and over to knock more grease off the pole and climb higher, but by 11am, if the ham hasn’t been rescued, the trucks roll out. There are six trucks in all with about a five minute gap between each truck. Because the streets are so narrow and there are 30 000 people packed in, the crowds press tightly against each side to allow the trucks to pass. 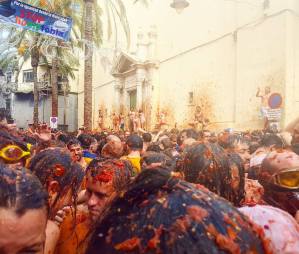 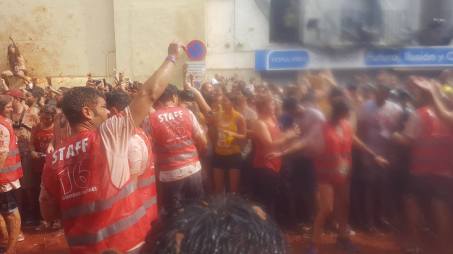 It’s amazing. There’s basically only one rule: Squash the tomatoes before you throw them! This is to make sure that they don’t hurt as much when they hit you. Be prepared for people to rub tomato in your hair and try to stay upright because it’s basically impossible to try and stand up if you fall over due to tomatoes and crowds. 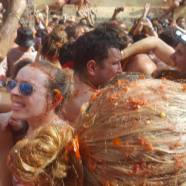 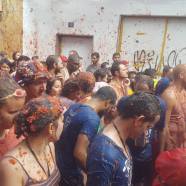 The cleanup for this event is crazy!

Some people try to take solace from the tomatoes on balconies. 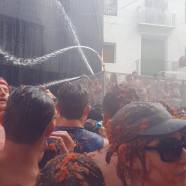 Water to help people wash off as they exit.

The chances are that you will definitely lose your friends. Go with the flow and have a ball since the actual tomato throwing actually goes for about an hour. Make sure that you arrange a spot to meet after though!

This festival is one of the craziest, weirdest and most insane things that you’ll ever do in your life and there’s nothing quite like it! You’ll be washing tomato off yourself for days after (and out of your hair) and you might come out in a rash due to the acidity, but it’s worth doing once. Go crazy and throw your ‘food’, just like your parents always told you not to!

Finally, what advice would I give?

Wear goggles. They’re not sexy but they sure as hell protect your eyes from the acidity and chunks of tomato flying every which way. If you’re going to take your phone, make sure you keep it in a plastic case which you’ve tested for waterproof-ness beforehand. Keep it tucked down your shirt on a secure string in order to prevent losing it and theft (unfortunately, quite common).

Apart from that! Have a ball!

5 thoughts on “La Tomatina is Insane”