It was two days before La Tomatina and I met two girls from Melbourne in my hostel in Valencia.

“We’re here to go to La Tomatina,” they explained, “but we really want to go to Requena for the ‘Water and Wine’ Festival”.

Curious, I looked into it and the more blogs and information I read about it, the more I wanted to go.

Getting there and back from Valencia is pretty difficult unless you’re going with a tour, but our amazing hostel receptionist organised us a taxi to get home. We caught the last bus from Valencia to Requena, an hour away, at 7:45pm on August 30th.

We were armed with waterproof, plastic cases for our phones because we wanted to try and get some pictures of the event. I’m really sorry in advance that my pictures aren’t up to the usual standard – It’s because of a combination of the lighting (really dark), the fact I couldn’t use a flash through the plastic cover and also that the plastic cover often had water or wine on it which made the pictures blurry.

We had dinner and had a walk around the town before following the sounds of music and cheering to the Colosseum-like structure up a hill.

We didn’t have tickets to that part, so we waited around for the real festivities to start at midnight.

Groups of teenagers passed us on their way up to join the crowds, with random years like “2018” written on the back of their shirts.

Others wore shirts with Spanish written on the front and back that rougly translated as “Wine won’t cure depression…but neither will water!”.

The festivities inside the Colosseum ended and a marching band spilled out on to the street. Everyone began trailing behind, dancing to the typical Spanish music that they blasted out of horns in time with drummers.

Locals lined the narrow streets, and others watched from their balconies.

That’s when the fun starts.

The Requena ‘Water and Wine’ Festival, known formally as Noche de la Zurra, is about celebrating and thanking the Gods for a bountiful wine harvest with lots of water to grow the grapes.

The locals who don’t join the procession stand on their balconies and throw buckets of water onto the crowd. They use hoses and water balloons and the procession gets more soaked as it winds its way through the streets.

The crowd will pause in the street every so often and chant “AGUA, AGUA” to demand more water to be thrown.

You’re soaking wet and dancing and it’s crazy and fun.

Along the route, there are trucks parked with volunteers on the back.

Make sure you bring a cup, a water bottle or just any sort of drinking vessel, because these trucks are NOT filled with water.

You pass in your cup and they will fill it with red wine…for free!

You then throw this red wine at each other, and obviously drink it, as you dance along through the streets of Requena.

People along the route will also spray sweet, sparkling wine into your mouth, although they generally aim to miss and hit you in the face for more fun! 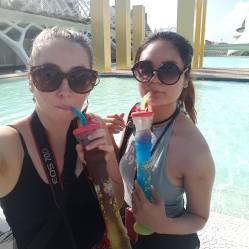 Our awesome slushie cups we bought specially for the festival

A man gets sprayed in the face with wine

At some points, the band switched from Spanish music to more recognisable tunes like Pirates of the Caribbean or Mission Impossible.

The atmosphere was electric and we ended our night covered in water and wine and smiling from ear to ear.

The procession starts anytime after midnight and goes until about 3 or 4am, winding it’s way through the streets, ending at a stage with more music and a bar.

This festival and celebration is far more local than La Tomatina, which has been taken over by tourists since…forever (but I guess especially in the last few years).

If you can get out to Requena, it’s definitely worth the trip and you will have a blast. It’s a celebration and everyone is so happy – smiling and laughing. Families line the streets to watch the parade (make sure you don’t tip water or wine on them!) and the atmosphere…aaaaah! It cost us 5 Euros on the bus to get there and 90 Euros to get back to Valencia in a cab. Well worth it!

A hidden gem and I’m so glad I went.

The crowd gets down on the floor during the band playing, waiting for the climax of the song

Almost at the end of the parade

Covered in red wine and water!