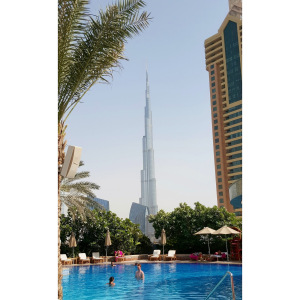 Dubai is one of the craziest cities on the planet that I’ve visited so far. This city rose from the desert sand to become a booming oil and tourist capital of today’s modern world. Dubai oozes wealth and seems to have the biggest and best of everything, leaving you asking yourself “What can’t money buy?”
We were lucky enough to visit Dubai as the third stop on Nova’s Red Room Global Tour and arrived to a very swanky hotel. You might have heard of the Shangri-La Hotel group? From one side of the hotel was a direct view of the Burj Khalifa. On the other – the World Islands. Class and decandance was obviously of the highest priority in this hotel and we instantly felt at home, welcomed by the fabulous staff!
Whilst in Dubai, Tourism Dubai set us up a plethora of activities to keep us entertained! As soon as we arrived in Dubai, straight in from London, we were off to Ski Dubai – the largest indoor ski field in the world!

We went from 49 degrees Celcius outside to -2 degrees inside, a bit of a shock to the system! I could have happily spent many more happy hours quite contentedly skiing the two runs complete with two different lifts inside, but before we knew it we were back in the heat and off to a desert safari with Platinum Heritage tours! 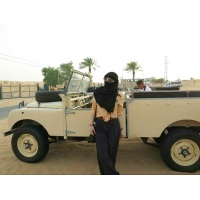 1950s open-topped Land Rovers through a wildlife reserve followed by a sunset falconry display with Summer the Falcon and her trainer made the day seem even more surreal. We sat on cushions in the sand and watched as Summer’s trainer demonstrated to us the amazing speeds that Summer could hunt her prey at. This bird was truly remarkable!

The back into the Land Rovers as we made our way to a desert oasis for dinner, Henna, Shisha and performances.

The food was absolutely incredible and when we thought we were full, more kept coming! I’d say the highlight of the meal was trying camel meat which was super tender and very flavoursome. Whilst in Dubai, I’ve also discovered a passion for dates, which they seem to serve as a starter to most meals, alongside traditional coffee.

Other highlights of our three days in Dubai…wow there are so many to choose from! We went up the Burj Khalifa, the tallest building in the world which is definitely a sight to behold! It’s hard to believe that this 828 metre high structure is soon not going to be the tallest in the world, as apparently Saudi Arabia is building one which will be 1000 metres tall!

Even from the viewing deck, which is just over 400 metres off the ground, it’s crazy how tiny everything looks and how fast the elevator ascends this incredible feat of architecture.

Another highlight was the Aquaventure Waterpark on the Palm Jumeirah. However, as this was my second time in Dubai (and the first was in winter), I’ve got to say that winter is a far better time to go. In summer, the air temperature is 49 degrees, the water temperature is probably about 30 degrees and your sunscreen literally melts off your body. You have to wear flip flops to get between the waterslides because otherwise your feet will blister from the scorching ground. However, in winter, Dubai is about 25 degrees celcius – the perfect temperature to enjoy a waterpark! The rides at this park are some of the coolest in the world, particularly the one which goes straight down and through a tunnel with sharks swimming on the outside – and all in about 8 seconds!

Finally, we visited the Sheike Mohammed Centre for Cultural Understanding. It was awesome to listen to Emirati’s talk about Dubai and answer our questions. We also had an incredible traditional breakfast and I would recommend stopping in if you get a chance because it’s such a great experience.

Unfortunately this time around, we didn’t make it to the Spice and Gold Souks but went in 2012 and they’re totally worth a visit as they’re so different to anything you would have seen before.

I love this city and will dfinitely be back as soon as I can afford it!